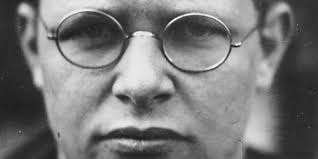 Cheap grace: sounds like an oxymoron, doesn’t it? But even a cursory reading of Diedrich Bonhoeffer reveals it’s itchy truth.

Germany: the land of Luther, Wagner, Nietzche, Hitler, Rahner, and Ratzinger. The list combines the very noblest and the most bestial of the minds and hearts of man. And there was also a man called Bonhoeffer.

I have read occasional meditations by Dietrich Bonhoeffer and found them intriguing but it was not until I began to read Bonhoeffer, Pastor, Martyr, Prophet, Spy by Eric Metaxas that I began to grasp the power and the far reach of yet another great theological mind from Germany.

In his biography, author Metaxas quotes Bonhoeffer with a stunning observation I paraphrase here:  it was the “cheap grace” of Germans that permitted -perhaps caused Hitler’s rapid rise to power.

Bonhoeffer writes that “Cheap grace is the deadly enemy of our church. We are fighting today for costly grace.”

He means, of course, the notion that our God is ever and always merciful, that forgiveness is a general truth, the “justification of sin without the justification of the sinner.”  Bonhoeffer’s beloved Lutheran Church had devolved to the dangerous general teaching that we see and hear from many today: Christ’s Body and Blood accomplished all, therefore all is peace and goodness. Cheap grace, writes Bonhoeffer is the “grace we bestow on ourselves.”

Here is a scholar, academic, lover of the opera, of all that was beautiful in German culture who slowly, painfully decides he must join the resistance, must join in a plot to assassinate Hitler.

“It is better to do evil, than to be evil,” reasons this PhD in theology, this Pastor of the Lutheran Confessional Church founded by him in opposition to the German Lutheran Church which capitulated to Hitler, to the fanatic adoration demanded by the Fuehrer.

It is better to do evil, than to be evil.