My Dog Shadow and Prayer for the Care of Creation 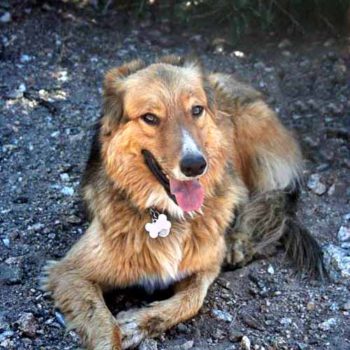 “When he looks at me, it feels as if he sees straight through to my soul.” The vet was commenting on my dog Shadow’s face like so many who can see the purity, wisdom and dignity of this beautiful animal who adopted us about 12 or 13 years ago. A gaze which stops your heart.

The veterinarian could not miss the distinct difference between Shadow and his adopted step-brother, Seymour. Shadow stood quietly regarding Dr. Cameron Ross while Seymour planted all four feet firmly on the floor and barked at the vet when he walked in the exam room. I hate this, hate being here, reminds me of being in the animal shelter, am scared to death of you and all these big dogs…I just know she’s going to leave me here alone in a kennel but maybe if I bark…written all over his face and rigid little body.

Turning to his vet tech, he asked, “Take Seymour for a walk outside to calm him down.”

Looking at me, Cameron said, “He wouldn’t have done that if I’d been here first. Now this is his room.” Really? It’s just his defending his territory? Once again, I’m giving this guy an excuse to act crazy?

But I didn’t say any of that because by now, Cameron was crouched down beside Shadow and was smiling at him. “When Seymour started barking, Shadow came over to me and wagged his tail. He wanted me to know it’s okay-that’s just Seymour being Seymour.

“What’s going on with Shadow?”

I have been worried about Shadow for several weeks and have, to use a wonderful verb invented by my friend, Almita, been catastrophizing his symptoms of loss of appetite, weight loss, frequent diarrhea, and overall feeling kind of blah. But we were not there because of the symptoms. We were there because Shadow had to have his Rabies vaccine. Which I complained to my husband John about…”the shot will make him feel worse, I wish he didn’t have to have it…”

Cameron listened patiently while I explained the deal Shadow and I had. That when the inevitable tumor, renal disease, pancreatitis, or liver disease hits, we will preserve his dignity. And nodded. I understand.

“But there’s a medication I could give you for the diarrhea. I love this med because it does not wipe out the essential organisms from the gut, just stuff like giardia…chronic diarrhea can make you feel puny. I don’t feel any tumors, his gums look good…”

Could it be something this simple? Really?

On the way back home I gave Shadow the first of the pills, then later the second. And then he ate a real meal for the first time in days. Thank you Lord, I know we’ll need to say good-bye one day but not today, not today. Thank you Cameron.

Friday was the first of the month so I went to Adoration. And realized that Pope Francis had declared that day as the World Day of Prayer for the Care of Creation. Had I not taken that hour of silence and prayer in the presence of Christ, I would not have recognized the strange symmetry of my day: Speaking of my dog Shadow, Cameron said, “When he looks at me, it feels as if he sees straight through to my soul.”

…Our obligation to use the earth’s goods responsibly implies the recognition of and respect for all people and all living creatures. The urgent call and challenge to care for creation are an invitation for all of humanity to work towards sustainable and integral development.