Evil Can Only Be Overcome With Love: Paul the Apostle Movie 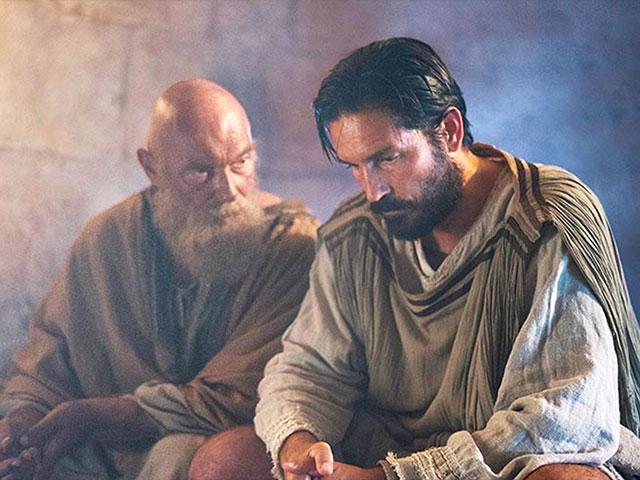 Evil can only be overcome with love: paul the apostle movie

It’s sixty-seven A.D. Nero is burning Rome to the ground and blaming Paul the apostle of Tarsas for the destruction. And yet the new movie, Paul the Apostle, has the feel of the 21st century from the very first scene. Although imprisoned in his dungeon, the man called Paul inspires terror in the heart of the Emperor of the Roman Empire. Enough to create ‘roman candles’- Christians being tied to a pole, drenched with a first century version of accelerant that explodes in flames when ignited, along the main streets. And Nero’s ‘circus games’, sport only to  viewers with appetites for watching frightened, starved animals tear Christians apart.

Too depraved for our civilized time? Consider the close to seventy-five wars between 1990 and 2002. Another forty-some between 2003 and 2010, many ongoing. Killing countless millions in just under thirty years.

Jim Cavezial (the actor who played Christ in Mel Gibson’s Passion of the Christ) began speaking to college students publicly-and powerfully about his new movie several months ago. Long a fan of this actor, I have been touched by his passionate testimony to young people. Upon learning that thirty-five year-old Andrew Hyatt (Full of Grace) was both Director and Screen Writer for Paul, Apostle of Christ , the film became a must-see.

Hyatt’s production budget was just five million, about a sixth of the cost of most Hollywood movies. And yet, he manages to envelop his viewers in those last days of the most famous Christian convert as he speaks with a frightened Luke, the Greek physician. Encouraging, challenging, even dictating the words for what would become the Acts of the Apostles, the last of the Gospels in the Bible.

Much of the tension is created by dialogue- between Luke and Paul or Paul with the Roman Tribune. Or beautifully tender and wordless scenes of the Roman Tribune offering sacrifices to the Roman God of Health Fortuna, as he begs for the life of his critically ill daughter.

Speaking recently with an interviewer, Hyatt explains why he thinks today’s faith-based movies tend to be far too insular:

…..there is this tendency to want to make ourselves feel good as Christians, to watch things that inspire us, rather than maybe look at the muddier side of things, if you will, that are part of the human experience.

Christian films can resonate because they’re speaking to your already-lived experience. But as Christian filmmakers we have to get much better at really digging into these struggles we are all facing, whether you are a believer or a nonbeliever. I think there is this tendency to just avoid those things.

I hope that Paul at least sheds a little bit of light on the suffering that we all go through, and that there is an answer out there — this beautiful truth of love and grace, this new path. I think we need to get better at being okay with showing the dirty laundry of our sin and our struggle in the faith, rather than making everything feel so “vanilla” and so happy and wonderful.

Little is ‘wonderful’ for Christians in first- century Rome. Large loads of dirty laundry are revealed as fear, discord and the very human propensity for revenge looms large among the group of Christ-followers committed to The Way, cresting with the murder of one of their own. A heartbroken Luke attempts to convey the terror, anger and despair of the Roman Christians to Paul. But the older man is unwavering:

Evil can only be overcome with love.