Feast of the Ascension-Why Does It Matter To You And Me? 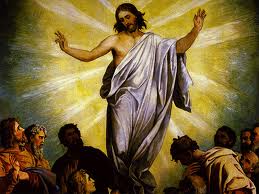 The Feast of the Ascension: Why Does it Matter?

Last night, Fr. Paul began his homily during the vigil Mass for The Feast of the Ascension of Jesus, with that question.

It’s a fantastic scene, isn’t it? This event witnessed by eleven ordinary people a couple of thousand years ago; fantastic to them then and fantastic to us now. Perhaps so absurd that most of us believe it as fictional as the Marvel comics.

The event is described both in Acts and in Matthew: When they had gathered together, they asked the question they’d been asking for the entire three years of the ministry. Are you finally going to do it? Are you going to restore the kingdom to Israel? What else were they to think, these Jews who knew well the promise of Moses, Isaiah? This was the root of Jesse, the long awaited successor to the King of Kings: David.

Jesus understands. He makes no attempt to explain the inexplicable, rather, He tells them simply,

“It is not for you to know…but you will receive power from the Holy Spirit…and you will be my witnesses..to the ends of the earth.”

“The eleven disciples went to Galilee, to the mountain to which Jesus had ordered them. when they saw him, they worshiped but they doubted…”

Matthew ends his Gospel with the command and the promise:  …”Go and make disciples of all nations….And behold, I am with you until the end of the age.”

It would be easier if we were told that the “spirit” of the Lord ascended; a burning white ball of energy exploded from His body and shot up into the skies like a cannonball. We of the 21st century are familiar with such images; it’s the notion of watching a body, even His, ascend up and up that defies credulity, even our Spielberg infused imagination.

And that is just the point, we are reminded here by the homilist: These bodies which we at times inhabit with great reluctance cannot be conveniently separated into pure, cleansing spirit and desiccated, discarded shell. No, they are uniquely our own; integrated with a perfection we cannot feel or sense with His Body. Meanwhile, there is work to be done, we are reminded by the two men in white: The admonition is blunt- stop standing around!

I wrote the above article five years ago

but am thinking once more about that question: “Why does the Feast of the Ascension matter to you and to me?”

And my somewhat satirical reply of “Stop standing around!” feels like a proper response. Especially if, like me, you have had personal experience with the Spirit. Then you can hear, even appreciate, the tangible urgency of the message to the Apostles.

Not that the Triune God is comprehensible to me. Not that at all. But this increasing seed of faith that trusts what He told them.

As we look about us, are there gifts we’ve been given and kept to ourselves thinking that we’re not good enough? Or people we should tell we love but do not in fear that they don’t feel the same way? Maybe there’s an itch here or there to just do it: Go to church?