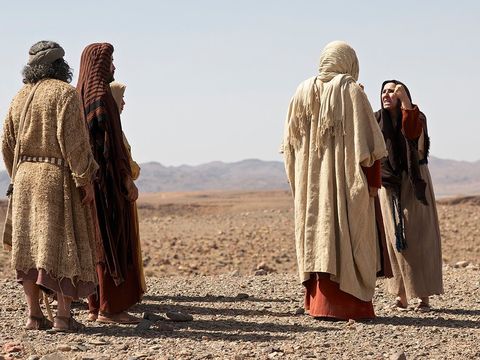 The three siblings are well known: Lazarus-the man who is raised from the dead, and his two sisters are close friends of Jesus. So close is the family to Jesus that He goes to dine with them.

Martha is remonstrating Christ, “If you had been here, my brother would not have died!”

We hear only from the two sisters, Mary and Martha, who are compared frequently, usually with Martha as inferior, at least spiritually, in the earlier part of this tale. Lazarus is silent. Focused on the work of welcoming and feeding Jesus and the group of His followers, Martha complains to Jesus, asking him to tell her sister Mary to get up and help.

I have been thinking about Martha for years…and the comparison with her sister Mary. And my sympathies invariably lie with Martha, because I have an image, a very clear vision, of what she is dealing with. As, I suspect, do most women.
Tradition tells us that Jesus did not travel alone, quite the contrary; from what we guess, there were generally 10 to 20 people traveling with him.
That is a lot of people to worry about, be hospitable to, make sure they have drink, bread and hummus while the main meal is being prepared. So her request of Jesus seems more than reasonable to me.
I’ve listened to many homilies on that gospel about Mary and Martha and have read a number of meditations on Jesus’ reply to Martha’s lament: “Tell my sister to help me, can’t you see how much there is to do?” Most are critical of Martha and praise Mary.

In the Christian liturgy, July 29th is the feast day of St. Martha. And the Gospel for today is from St. John, not Luke or Matthew. Only here do we read the rest of the tale seldom heard about Martha’s faith..


When Martha heard that Jesus was coming, she went out to meet him, but Mary stayed at home. “Lord”, Martha said to Jesus, “if you had been here, my brother would not have died. But I know that even now God will give you whatever you ask.”

“Yes, Lord”, she told him, “I believe that you are the Christ, the Son of God, who was to come into the world.”[

Do you believe this?

And then Martha beckons her sister to come and see. Only when I listened to the homilist distinguish among the three accounts of the well-known Mary-Martha tale, did I consider what St. John tells us about Martha…her personality, but more importantly, her faith.

While Mary stays at home, presumably mourning the loss of her brother, Martha runs to Jesus, “If you had been here, my brother would not have died!”

Think of it. The tale seldom heard about Martha’s faith.

Her brother died four days before. Yet Martha adds to her remonstration, “But I know that even now God will give you whatever you ask.”

Pure, simple, child-like, faith. Which deepens as Jesus instructs her by through his questions. To the Lord’s statement, “Your brother will rise again.” Martha replies “Yes, I know…” She is a Pharisee not a Sadducee , therefore Martha believes in life after death. But our Lord takes her even further…

I have conquered death…

Do you believe this?

“Yes, Lord! I believe…” We hear only a slight variation of these words from Peter when he replies to Jesus’ question, “Who do they say I am?”

So much of what we read and hear in the news about our country, our politicians, our churches, our world feels dark…even dead.

Do you believe this?”