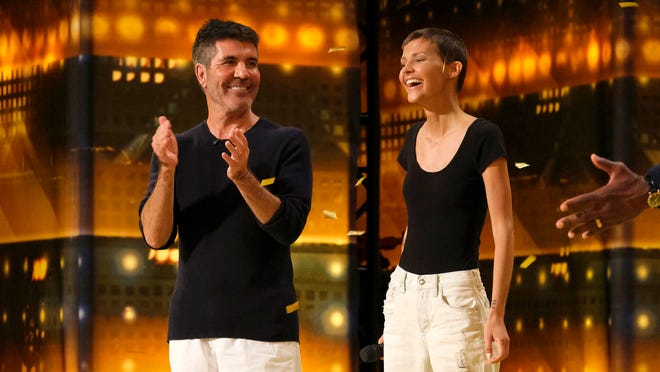 Her name was Jane Marczewski (Nightbirde.) And she became known when she appeared on America’s Got Talent to sing her song, “It’s ok, it’s ok, it’s ok”. After performing a song which left the judges weepy and speechless, Cowell finally asked the thirty-year-old Jane how she could do this: make a song out of a disease which was killing her?

“You can’t wait until life isn’t hard anymore to decide to be happy.”

Cowell, understandably, was dumbstruck. And then reacted by giving Jane the “Golden Buzzer Award.”

Had my friend Mary not sent the link to the Christmas homily by Fr. Mike Schmidt, I’d never have heard of Jane Marczewski or her heroic battle with the cancer which began in her early twenties.

Yes, the Christmas season for 2021 is in our rearview windows and the decorations down and boxed up for next year. But the content of Fr. Scmidt’s homily warrents attention in mid-January and mid-July. Although I found the priest’s talk challenging, he got my attention when with the need to look up at the Glory of God, of the Glory of God which was evident above the Jerusalem Temple. Until the sins of the people caused the visible manifestation to leave Jerusalem.

Where do we find the infant Jesus?

In a kingly splendor?

Emphasizing the reality of the manger, the smells, presence of animal excrement he forces us to discard our romanticizing the savior’s birth. Fr. Mike’s used the now dead singer’s writings to exemplify our incapacity to find God “because we don’t look low enough.”

If you decide to listen to Fr. Mike’s semon, it begins on the fourteenth minute of the youtube video.

Happiness is something I think and therefore write about

simply because of my experience with its absence in my early life, in fact I’ve written more than a couple of pieces on the subject.

But not too long ago, after a conversation with my husband, I decided that the real goal may not be about happiness at all but rather, about avoiding unhappiness. Here’s what happened.

“So, are you happy now that I, Claudia is done?”

I stared at my psychologist husband and grudgingly admitted. “I was happier while writing it because now I’m wondering what to do in the next book…”

We’d been discussing happiness. That everyone says they want a happy life, happy marriage, they want. to. be. happy. But when asked how that is defined, often the answer is in the negative…”I don’t want to be poor”…”I don’t want to hate my job like…” or a generic,”I don’t want the life my mother had..”

John’s statement, “What we really mean when conceiving of a happy life is learning how to avoid unhappiness,’ felt wholly right then and now. Here are just a few of the reasons why.

You can’t wait until life isn’t hard anymore to decide to be happy,” summed up everything I have thought and written on the subject.

Fr. Schmidt was close to tears while reciting lyrics and passages written by the young woman called Nightbirde during her barely three decades on the planet. And certainly there is much to feel intense sorrow for. But stopping at the sorrow, loss and tragedy of a life cut short and filled with suffering deprives us of rare and precious wisdom.

I’ll wager that the reason this priest wrapped his Christmas homily around the Jane Marczewski was his recognition of someone who had found God in every crevice of her emaciated body.

Here are the lyrics of the song she wrote and sang:

I moved to California in the summertime
I changed my name thinking that it would change my mind
I thought that all my problems, they would stay behind
I was a stick of dynamite and it just was a matter of time, yeah

[Pre-Chorus]
Oh dang, oh my, now I can’t hide
Said I knew myself but I guess I lied