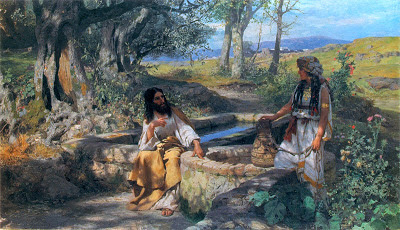 When Christ meets her, she’d had 5 husbands and is currently living with a man to whom she is not married. But in the eastern Catholic Church, she became St. Fantine…Fantine, the mother of Cosette in Les Miserables, Victor Hugo’s tragic story we know because of the splendid-at times celestial- music from the Broadway play and the recent film.

We are taught that the Gospel is the living Word…despite all the iterations of translations through the centuries, that truth becomes evident to me with a March 9th homily on the conversation in the Gospel of John which should never have happened had Jesus adhered to the prejudices of his people.

The history of the Samaritans was fraught with centuries of conflict sufficient to evoke enmity and hostility from Jews and yet Jesus “happened” to be there as she came to Jacob’s Well for water in the heat of the day. And He initiated a conversation with her by asking for water. Jews did not associate with Samaritans and no one spoke with a woman. Apparently His request was on a par with a circa 1850’s Southern white man asking a female black slave to let him drink from her flask that she carried while picking cotton.

It’s been close to 3 weeks since I heard that Gospel and the homily but I keep thinking about her and Him; the simplicity of their encounter and the fact that the Christian liturgy places this reading at the beginning of Lent.

All we are told is that the woman had been married 5 times and was now living with a 6th man who was not her husband. Even in this “post Christian” 21st century, 5 marriages gets our attention; after all, that’s a good deal of action-we are led to believe this woman is still young.

In the passage from John, we sense almost a playful tone from the Lord as he interacts with the woman and a definite lack of judgement about her colorful past. And I wonder just what it is about this woman that attracts Him enough to tell her about Living Water, that indeed, He is the Messiah…when he does not do so with others whom he meets.

And her response to Him?

She leaves the water jug which she had likely carried quite a distance, in the heat of the day, leaves it at the well to tell everyone she knows Whom she has met. This unnamed, sinful, woman of the wrong sect becomes His 1st Evangelist. Is it any wonder that the Eastern Church names her and makes her a saint? If He spent that time with her in an intimate conversation, what can that mean for those of us who have worked so hard to lead righteous and faithful lives?

Indeed, what can the simple interchange portend for you and for me in this Lent of 2013?

Grief, Sorrow, Loss-Is There A Purpose In Them?